Boston Pioneers is a Free School Academy within The Boston Witham Academies Federation.

The Boston Witham Academies Federation is a limited company by guarantee, with charitable status, operating under the direction of a The Board of Directors.

The operation of The Boston Witham Academies Federation is detailed within the Master Funding Agreement, along with Supplemental Funding Agreements between the Trust and the Department for Education for each Academy.

The current governance structure is as follows: 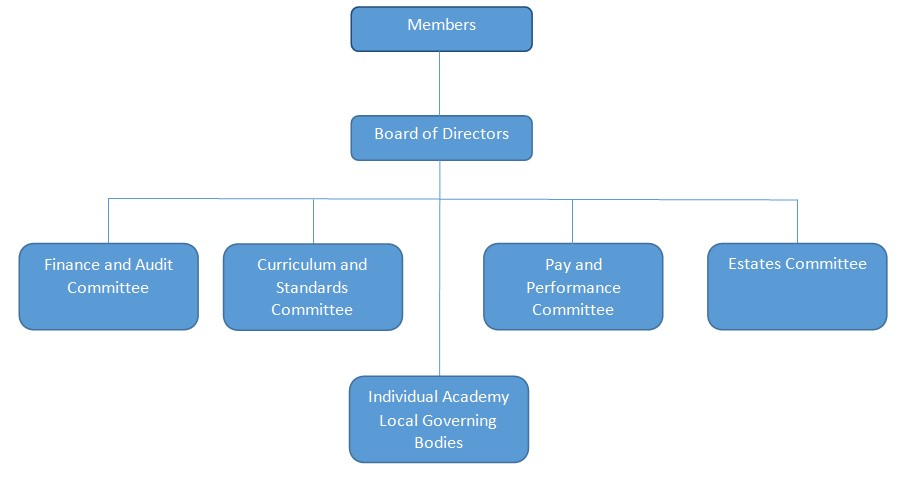 For more information on the Trust, including financial information, details of Members and Directors,  please visit www.bwaf.net

Each Academy within the Trust will have its own Local Governing Body. This will ensure that, although part of a single organisation, each Academy will draw governors from its own community and parents and thus maintain their unique character.

The Local Governing Bodies must meet a minimum of three times a year. Additional meetings maybe arranged depending on the circumstances of the Trust at any given time.

Their principal responsibilities concern curriculum, standards of attainment, pupil/ student progress and individual premises issues. At each meeting they will receive a report from the Head of Academy, with the Executive Head attending upon request/ invitation of the Chair of the Local Governing Body or Head of Academy.

At each of the Board of Directors meetings, the Directors review the minutes of each Local Governing Body. The Directors are able to use the minutes to challenge the Governors and Head of Academy, holding them account to performance and decisions that have been made.

Local Governors are subject to a maximum term of office of four years.

Members of Pioneers Local Governing Body as are as follows:

Major Radford is the former Major of Boston Salvation Army’s Citadel.  He has a background in education and is experienced in Safeguarding.  He is our named Safeguarding and Pupil Premium Governor.  He is actively involved in the delivery of ‘The Bridge Project’: A joint initiative between the Salvation Army and the school to help our families for whom English is an additional language integrate fully into society. (Declaration of interest: The Bridge Project).

Mrs Warsop is from an HR background and has previously worked in educational settings.  She is our Governor with responsibility for Health and Safety.

Mrs Chapman comes from a nursing background and oversees SEND & Inclusion within the school.

Chair of Governors – Mr A Marriott – appointed 8th October 2013 (Term of Office, 4 years) – He is a Parent Governor.  Stepped down September 2017 due to Term of Office being up.

Community Governor: Mr D Shepheard – appointed September 2013 (Term of Office, 4 years).  Mr Shepheard was a founding member of Pioneers Academy.  Stepped down Sept. 17 due to Term of Office being up.

Staff Governor – Mr Mark Mitchell –  appointed May 2017 (Term of office, 4 years. Stepped down July ’18 due to taking a teaching post in Thailand.

Contact information for the Chair of the Governing Body:

Should you wish to contact the Chair of the Governing Body this can be done through contacting:

The Clerk to the Governing Body

Membership and Attendance of Meetings